Principles of Confucianism
Confucianism，one of the various schools of pre-Qin philosophy. Confucianism is created by Confucius, and gradually developed to a complete Confucianism system. Since then, it dominated the Chinese ancient thoughts and had great influence to ancient China. For more than thousand years it has moulded and shaped the civilization of China and exerted a profound influence upon China, Southeast of China, or even the world.

Confucianism has left us a rich literary heritage knows as the Four Books and Five Classics: The Great Learning, The Mean, Analects, and Mencius; Book of Change, Book of History, Book of Odes, Book of Rites and Spring and Autumn Annals. For six centuries these four texts became the elementary requirements of Chinese education in the feudal society and served as the basis of the civil service examination by which scholars were selected for official posts at various levels of the government.

The ethical principle of Confucianism is its discovery of the ultimate in the moral character of human relationships in which Confucius offered the solution for the ills and evils of his day. Confucius' central doctrine is that of the virtue of Ren. Ren is translated variously as goodness, benevolence, humanity, and human-heartedness. In short, Ren means affection and love. 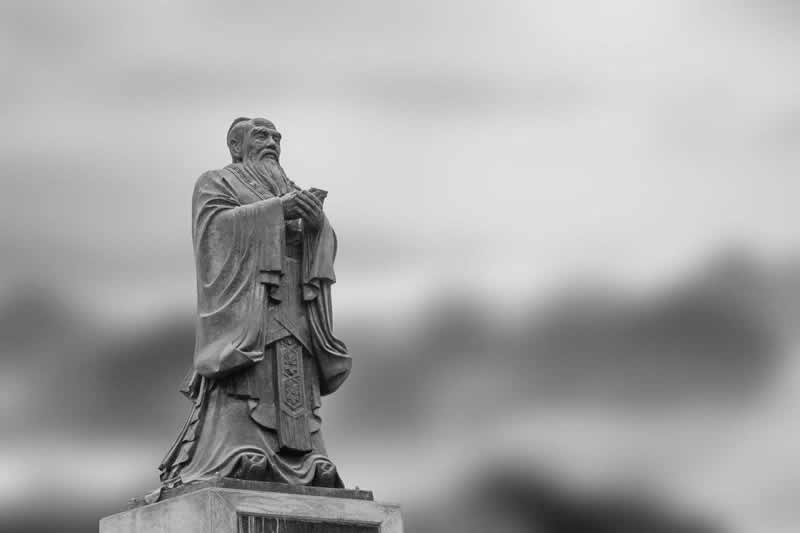 Essence of Confucianism
Confucius is regarded as the “Great and Revered Teacher”, a teacher for all generations. From the dawn of civilization to the Revolution of 1911, he has so deeply influenced the daily life and thought of the Chinese people that he is respected as the moulder of the Chinese mind and character. His thoughts and teaching are taken as the symbol of traditional Chinese culture.

What is our national spirit and national character? It can be summed up in eight words: loyalty and piety, affection and love, faithfulness and righteousness, peace and harmony, as pointed out by Dr. Sun Yat-sen.

The four historical periods of Confucianism
Ever since its establishment, Confucianism has continually developed and changed to meet the different social demands in the last 2500 years.

The first stage: the primitive Confucianism with representatives including Confucius, Mencius and Xun Zi
From the late Spring and Autumn Period to Warring Period, Confucianism was one of the most influential thoughts at that time. However, the proposition of Confucianism about the ideal political system and law principles was too abstract and theoretical to be accepted by the monarchs in the fragmented world. So it was only a political aspiration and offered principles of moral cultivation. Confucianism encountered its biggest disaster when Emperor Qinshihuang burnt Confucianism books and buried Confucian scholars alive.

The third stage: the rational, unemotional Confucianism in Song, Ming and Qing dynasties
Buddhism had made a significant impact on scholar-officials since it was introduced to China. Confucians were upset about it. And then in Song Dynasty, they, including the famous Zhu Xi and Cheng Yi, made the renaissance of Confucianism their mission. The renaissance mainly focused on the cultural traditions, etiquette, moral rules and standards of behaviors (the political system based on Confucianism had been fully maintained by the rulers). However, the renaissance also potentially had a negative effect on the social development and locked out people’s mind.

The fourth stage: the modern, new Confucianism around 1950s
The decline of feudalism, Hundred Days' Reform movement and the influence of modern western culture urged the innovation of the traditional Confucianism. Kang Youwei, the leader of the reform movement, proposed an ideal world by adopting both the modern Western social system & concepts and the innovated Confucianism. But he failed. After the end of Qing Dynasty, China’s last feudal empire, Confucianism is gradually only regarded as a cultural and ideological heritage. 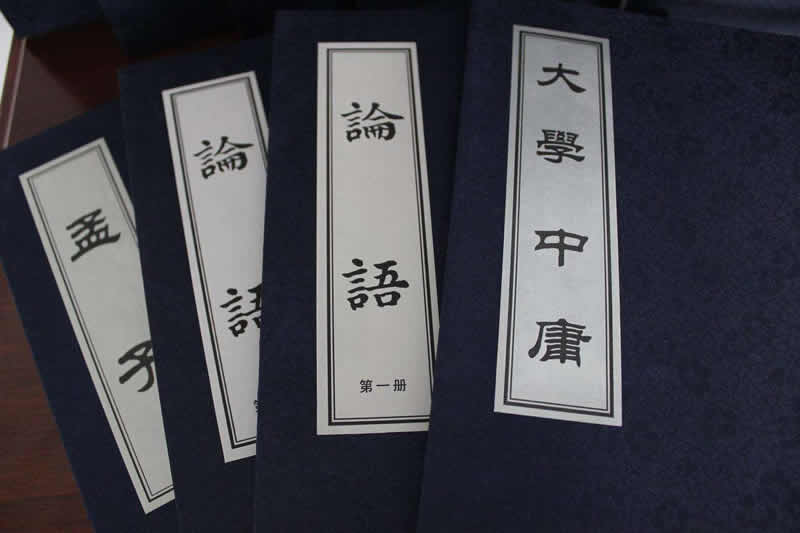 Influence of Confucianism
Confucianism, a philosophy rather than a religion, was a series of codes for China's population to abide by. It was hoped that by following such a conduct of benevolence the population would harmoniously live together under the traditional Chinese system, a feudal system of altruistic despotism. The populace were expected to obey their seniors (hierarchical paternalism), to be selfless and strive for the common good. Temperance was placed as a primary virtue. The emperor and those in positions of power were also expected to follow the Confucian Principles of Government, thereby lessening the Emperor's claim to his divine right. Confucius suggested that the governors should "rule the people with love and train people to learn good manners". Confucius dreamed that by doing so, the country would be as strong as his ideal, the Western Zhou Dynasty when "all orders were issued by the emperor".

Driven by cultural globalization in the last few decades, China’s Confucianism has spread around the world. Hundreds of Confucius Institutes have been built in 127 countries and regions ever since 2006. Confucius has become a cultural icon of China and is popular among world’s Chinese culture enthusiasts.

Famous Confucianism Ideologists
•Confucius (551BC – 479BC)
The founder of Confucianism, Confucius was student of Lao Tzu (founder of Taoism) and is widely known as the first saint, the greatest ideologist and educator in China. He was also the forerunner of private school, and advocated “there is no teaching in accordance with aptitude”. 72 of Confucius’s 3000 students were ancient sages. Confucius, with his students, traveled through all the vassal states to publicize the doctrines of Confucianism, and compiled the six classics of Confucianism.

•Mencius (372BC – 289BC)
Mencius is another important Confucianism ideologist, and regarded as the Secondary Saint. His main theories include “benevolent government”,” The people are more important than the monarch”. His doctrines was not accepted by the monarchs during the Warring Period, but his and his disciple ‘s speeches were compiled into The Book of Mencius.

•Dong Zhongshu (179BC – 104BC)
One of the most important ideologists and philosophers of Confucianism, Dong Zhongshu proposed to the idea of "Ban a hundred schools of thoughts, and venerate Confucianism", which was accepted and highly valued by Emperor Wu of Western Han. Ever since then, Confucianism has taken the dominant position and influenced all respects of Chinese history extensively and deeply.

•Zhu Xi (1130 - 1200)
Honored as Zhu Zi, Zhu Xi epitomized the thought of Confucianism, and has been enjoying the sacrifices of Confucianism etiquette in the Dacheng Hall of Confucius Temple. His Neo-Confucianism thought had a huge impact on the development of Yuan, Ming and Qing dynasties. 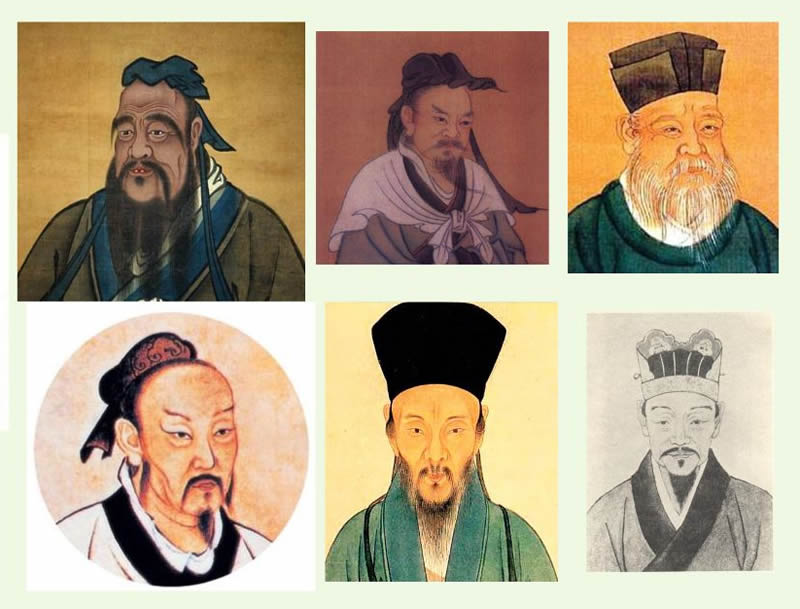 Rule by ritual: the essence of Rule by Ritual is difference. No matter the people are rich or poor, old or young, they have their own ritual, and they have to obey their rank order, which can develop to an ideal society the Confucianism desires. Whether the country is peaceful, it bases on the stability of the rank order. The ritual of Confucianism equals to a form of law. The essence is preserve patriarchal clan system. Someone who violates the ritual must be punished.
Rule by morality.

The sacred places for Confucianism
Qufu in Shandong Province
The ancient capital of the State of Lu in the Spring and Autumn Period, the hometown of Confucius, Qufu is honored as the “holy city in orient” or “the oriental Jerusalem.” There were eight great saints born in Qufu, including Duke of Zhou, Liu Xiahui, Yan He, Zeng Zi, Lu Ban, Zi SI, Mencius, apart from Confucius. Travel in Qufu, you can find a dozen sacred places for Confucianism.

Qufu Confucius Institute is the center of world Confucianism research and exchange.

Qufu Confucius Temple – Initially built in 478BC during the Zhou Dynasty, and rebuilt in Ming and Qing dynasties,  it is the biggest among the over two thousand Confucius temples in China. There are 466 rooms in total, constructed in Jin Dynasty, Yuan Dynasty, Ming Dynasty, Qing Dynasty and the Republican Period respectively. The temple preserves more than 1040 historical inscriptions and a wealth of cultural and artistic relics including books, calligraphy, painting, tables, etc.

Confucius Family Mansion – Confucius’s direct descendants have been living in the mansion for generations. It is biggest and best-kept yamen government office and private house combined architecture in China. The emperors in Chinese history did not only advocate Confucianism, but also appoint Confucius’s descendants government officials and title of nobility. Confucius Family Mansion has a collection of over 100,000 historical sacrificial vessels, paintings of Confucius and data of the events held in the Mansion in the last 400 years.

Cemetery  of Confucius  – The biggest family cemetery in the world, it has over 100,000 tombs. Over the last 2000 years, the descendants of Confucius were buried here. There were more than 100,000 trees, including many ancient trees and various kinds of exotic plants and rare herbs. Thus the cemetery is also a huge natural botanical garden. In addition, it is an outdoor museum, featuring ancient architecture, stone carvings, stone inscriptions and tablets.

Famous sayings of Confucius
Chinese: 敏而好学，不耻下问
Literally meaning: quick and love to learn, no shame to ask
English interpretation: One should be fond of learning and not feel ashamed to ask and learn of his inferiors.

Chinese: 三人行，必有我师焉
Literally meaning：Three men walking, must have my teacher
English interpretation: Among any three people walking, I will find something to learn for sure.

Chinese: 己所不欲，勿施于人
Literally meaning: you don’t want, don’t do to others;
English interpretation: Do not do to others what you would not have them do to you.

Chinese: 玉不琢，不成器，人不学，不知道
Literally meaning: jade not polish, no use; man doesn’t learn, doesn’t know
English interpretation: If jade is not polished, it cannot become a thing of use. If a man does not learn, he cannot know his duty towards his neighbor.

Chinese: 君子坦荡荡，小人长戚戚
Literally meaning: decent men frank, wicked worries
English interpretation: Good people are at peace with themselves, (but) there is no rest for the wicked.

Chinese: 工欲善其事，必先利其器
Literally meaning: work want do thing, must sharp tool
English interpretation: A workman must first sharpen his tools if he is to do his work well.

Chinese: 吾日三省吾身
Literally meaning: I day three reflect myself
English interpretation: Self-introspection should be practiced on a daily basis.