Visitors to China are often surprised when a typical dinner for a table of eight people consists of four courses of cold dishes, four courses of hot dishes, coupled with soup and steamed rice. They consider it a lavish banquet. But in the mind of Chinese people, a dinner prepared like above for guests is the lowest standard. Ten course of dishes, not necessarily prepares in huge quantities, would not be considered excessive, and a few people would blink at sixteen course of dishes.

A Standard Chinese Banquet
A standard banquet will consist of four to eight prepares cold dishes, eight hot dishes served one at a time, two to four whole-size showpieces dishes, such as a whole fish, a whole suckling pig or a whole chicken, in addition to soups, steamed rice and pastries. The dinner finishes up with fruits. Overseas visitors should remember that it is often unnecessary to eat more than a single mouthful of a dish at a Chinese banquet. In this way, a Chinese banquet takes in the character of a buffet reception in the West.

However, an average Chinese meal at home is quite different in composition from a Chinese banquet. At an everyday home meal, an adult may consume two small bowls of steamed rice, or a large bowl of noodles, or several pieces of steamed bread, accompanied by several meat or vegetables dishes, but not the other way round. For the most Chinese, about 65 percent of an average meal's calories come from grains sources instead of meat or vegetable dieses. That’s why Chinese cuisine is regarded as one of the healthiest food in the world. 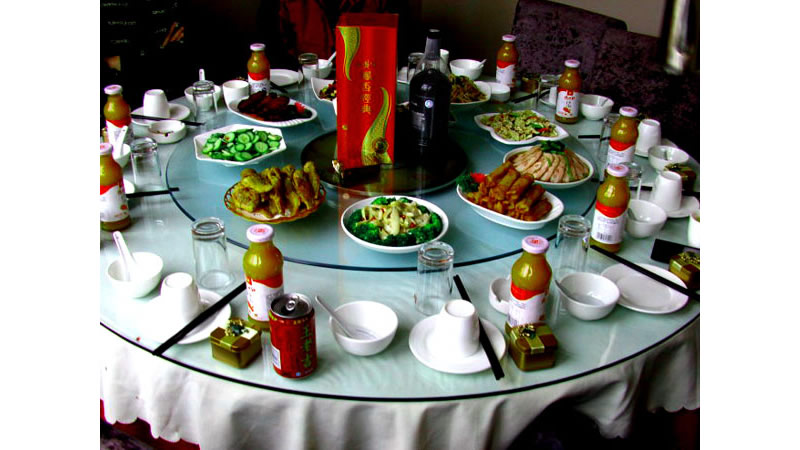 Toasting Each Other
People at a table will usually ‘Gan Bei' when toasting each other. ‘Gan Bei' means to raise up one's wine glass or liquor cup and drink it all the way down so that the glass or cup is ‘dried up to the last drop'. People dry up their glasses to communicate the message to others that they are sincere and joyful. In foreign gusts’ eyes, when toasting with his or her host, take a sip rather than empty the glass when toasting with host is more preferable. In order to show respect, younger people or people with lower position should lower their cup to the elder or higher position people when toasting.

Chopsticks
Chopsticks play the most important role in Chinese cuisine culture. Chinese people have used it as the main tableware since 3,000 years ago. Chopsticks can be made of different materials, such as ivory, bronze, gold, silver, wood or bamboo. In history, sliver chopsticks could be used as the detection of poison in food. Today, wood or bamboo chopsticks are the most popular in Chinese daily life. It is believed that using chopsticks would make people more adroit.

Here are a few things should be avoided when you are using chopsticks. Don't insert the chopsticks upright in the bowl filled with rice, because it is a custom in sacrifice. And Chinese people seldom beat their bowl with chopsticks for it can be associated with the behavior of beggars in the past year. Don’t crash into other people’s chopsticks when you pick up food with chopsticks, which makes you leave a gluttonous impression. It’s rude to make noise with chopsticks. 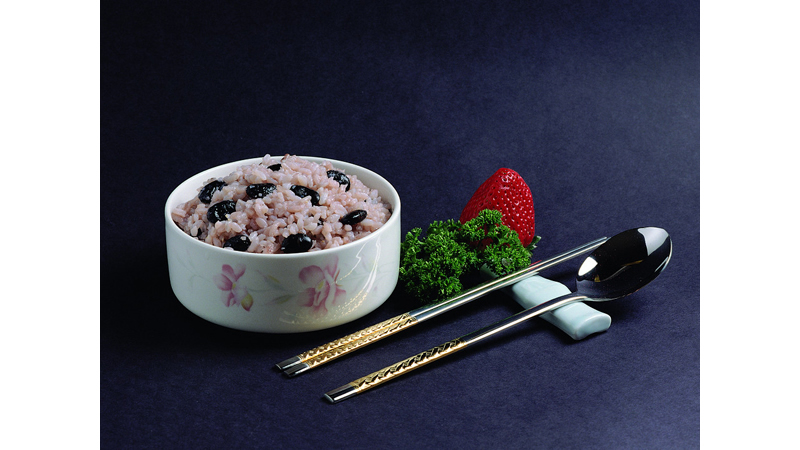 Cooked Dishes Serve as Centerpieces
Traditionally, at the Chinese dining table everyone had his or her own bowl of staple food, that is, steamed rice, noodles or the steamed bread, while the dishes are placed in the middle of the dinner table to be shared by all. This age-old custom is one manifestation of the importance of food in Chinese civilization: it is the cooked dishes, rather than flowers, that serve as centerpieces on a Chinese table; food is the main topic of dinner time conversation. Variety in the color and texture of the dishes serves aesthetic ends, while the ritual of sharing the food from the same dish plate is conductive to family togetherness and friendship. In more health-conscious environments, however, only ‘public' chopsticks and spoons are used to remove the food from the plates in the middle of the dining table, so as to prevent any possible spread of disease.

The Order of Seat
Chinese banquet has a strict rule about seat order. Sitting at left or sitting at east is a better seat than sit at right or sit at west. Generally speaking, the seat facing to the door is prepared to the host. The most important gust is usually arranged to sit on the host’s left, while the second important gust is arranged to sit on the host’s right.

Chinese Dinning Culture in Foreigners’ Eyes
While none of the above observation should strike a foreign visitor as particularly strange or exotic, they demonstrate that the Chinese approach some aspects of catering service with a set of values very different from those in the West. There is one key concept, however, which the Chinese share with the rest of the world. That is, fine food and good drink, taken in the company of good friends, constitute one of our supreme pleasures in life.