Gong Bao Chicken 宫保鸡丁 This is a famous Sichuan-style specialty, popular with both Chinese and foreigners. The major ingredients are diced chicken, dried chili, and fried peanuts. People in Western countries have created a Western-style gong bao chicken, for which the diced chicken is covered with cornstarch, and vegetables, sweet and sour sauce and mashed garlic are added.

Ma Po Tofu 麻婆豆腐 Mapo tofu is one of the most famous dishes in Chuan Cuisine with a history of more than 100 years. Ma (麻) describes a spicy and hot taste which comes from pepper powder, one kind of condiment usually used in Chuan Cuisine The milky tofu is enriched with brownish red ground beef and chopped green onion. It is really a tasty delicacy. Read the DIY recipes of Mapo tofu.

Wontons 馄饨 Since the Tang Dynasty (618–907), it has been a custom for people to eat wontons on the winter solstice. The most versatile shape of a wonton is simple a right triangle, similar to Italian tortellini. Wontons are commonly boiled and served in soup or sometimes deep-fried. The filling of wontons can be minced pork or diced shrimp.

Dumplings 饺子 With a long history of more than 1,800 years, dumplings are a traditional food widely popular in North China. Dumplings consist of minced meat and chopped vegetables wrapped into a thin piece of dough skin. Popular fillings are mince pork, diced shrimp, ground chicken, beef, and vegetables. They can be cooked by boiling, steaming, or frying. Dumplings are a traditional dish eaten on Chinese New Year’s Eve.

**** Many foreigners are surprised when they first eat the food in China. Especially on the east coast or in the north of China. The truth is the Chinese takeaway food we are used to eating back in Europe and America is actually Cantonese food and often layered with sugary sweeteners and MSG. The Chinese are very proud of their longstanding culinary and dining traditions. So do not be surprised when your Chinese friend ignores the chicken breast in favor of chicken feet or chastises you for throwing away offal or bone, which they consider a delicacy. 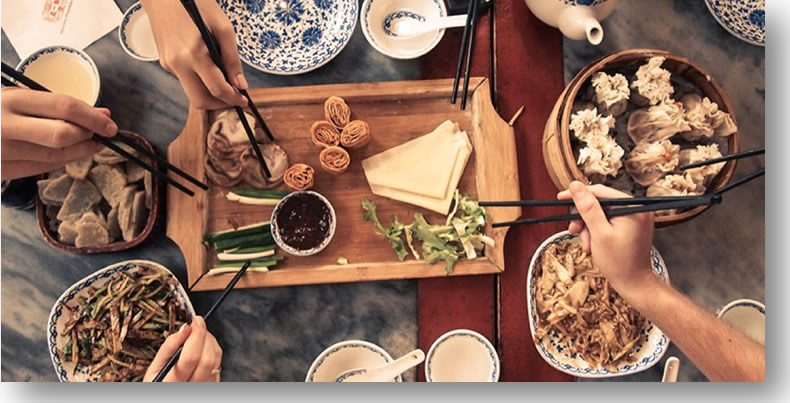